Professional caregivers that provide senior care as in-home care to females and assist with personal care needs such as grooming and bathing are in a unique position to assist with the early detection of breast cancer, while providing elder care. 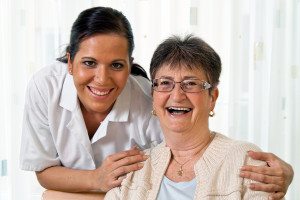 A recent study in the UK, conducted by Public Health England (PHE) gives some insights that are applicable to American women, especially those over the age of seventy-years old.

The conclusion of this survey is that the focus on detecting lumps in the breast through patient examination and self-examination has caused many to lack awareness of other symptoms. The reason this information is so important is that early detection of breast cancer has very high survival rates.

The PHE study found that for detection of breast cancer in its earliest stages, in women over 70, 93% live five years or longer. Compare this to breast cancer detection that occurs in advanced stages, where the survival rate drops significantly to only 13%. The PHE points out that a woman is never too old to get breast cancer, which can occur at any age.

Based on this study, the PHE launched a massive public awareness campaign in the UK to raise awareness of the breast cancer symptoms that are not lumps in the breast, which are:

Professional caregivers who provide in-home care can help with this awareness by explaining this information to the females they care for and by careful observation of them while helping them bathe.

Professional in-home caregivers remind us all that awareness is a powerful tool in the fight against breast cancer and that early detection is vitally important even for those women receiving elder care.

About the Author: Anne Marie Thompson

Anne Marie Thompson, President - My entire career as a nurse has been devoted to serving the senior population, helping them to age safely and independently in their homes.